She is a call girl who suffers from multiple personality disorder, which interferes with her job.

Valerie calls out to Alan and Dr. Bleed from across the alley and demands help for her personality disorder.

Patient appears to be some sort of call-girl who claims to suffer from multiple personalities. By the looks of her, at least one of them is a dude.

Patient claims that her brain is connected up all wrong and wants us to rewire her so she's not such a bitc- I mean, so that her possible mental imbalance is repaired.

Valerie possesses light skin and long orange hair, wearing a black dress with matching gloves and boots. She wears green eyeshadow and red lipstick. She initially appeared short-tempered and rude, but after surgery she became calmer. This also left her a bit woozy.

A pretty straight-forward procedure. Use the chainsaw to remove the top of her head into four parts. Extract the white objects with the tongs and fix up the cuts with the stapler along with the lighter and gel as normal. After that's finished you'll have to use the chainsaw to remove the dark part of her brain to replace it. Before you can replace it however, you'll need to use the lighter to burn the black rock-looking objects then cut out the poison with the pizza cutter and suck it up with the vacuum. After patching up the small cuts made, you should then be able to put the white part of the brain in place. Burn and gel it in place, then do the same for her glued together headpiece to finish the surgery.

In Amateur Surgeon 4, everything is basically the same except the time limit has been set much lower. Partners such as Katie Cutter, Professor Rippov, and Procrastibot 3000 can save you precious seconds.

A look into Valerie's affected brain 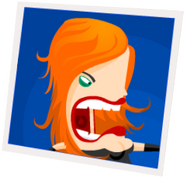 Unused sprite of Valerie from Amateur Surgeon
Add a photo to this gallery
Retrieved from "https://amateursurgeon.fandom.com/wiki/Valerie?oldid=8908"
Community content is available under CC-BY-SA unless otherwise noted.