Vladimir is a vampire who claims to have been attacked by an angry mob of villagers. However he attempts to keep his true identity a secret until after the surgery.

Vlad approaches Alan Probe, trying to convince him he's not a vampire by saying how villagers shot him with silver bullets, threw holy water at him and made him eat garlic — those are things that definitely would kill a vampire, but Alan thinks that would kill a human, too. Nevertheless, Vladimir states that bright light makes him burn, so the player must use a flashlight, similar to the president for operating in the dark.

After a successful operation, Vlad gives Alan a vial of vampire tears as thanks, which is later used to revive a special someone.

If they weren't before, things officially just got very strange. The patient has shown up with multiple "villager-inflicted" wounds, a cape and pointy teeth. He must think I'M the sucker! Ha ha ha! …sigh.

Concealed, laid-back, and mysterious, Vladimir usually covers his formal attire with his "cloak". He has several nails tied to his fingers and has two fangs that seem manually wedged into his mouth. Not much is known about him, but he is somewhat grateful towards Alan, after the latter cured his injuries and didn't harm him, despite him finding out about his true identity, instead giving him something in return, that would revive someone special later.

To complete the operation, the player must remove the stakes and vacuum the wounds and bruises shut.* (Since using the Needle and thread does nothing and applying either the torch or healing gel will end up causing burns, as well as shocking him). Next, cut inside of him and remove the garlic from the cuts, deal with the garlic poison and use the Ultrasound 5000 to locate the silver bullets. (Though in his AS4 Surgery, they are exposed to begin with). From there, we vacuum the wounds shut* and move on to the bats. In Amateur Surgeon 2, feed the 3 bats with the syringe with blood until they burst and vacuum the remains. (In Amateur Surgeon 4, they are the same wound-causing mutated bats from Batshift Crazy's operation.)

...but alas he can see right through him...kinda!

One of the old bats from AS2, which needed to be filled with blood in order to kill them off

One of the replacement bats, which can be zapped to death 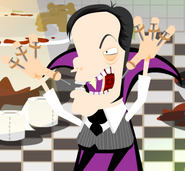 Vlad exposing himself to Alan
Add a photo to this gallery
Retrieved from "https://amateursurgeon.fandom.com/wiki/Vladimir_Ampire?oldid=7738"
Community content is available under CC-BY-SA unless otherwise noted.